Palestinian supporters of Hamas wave flags during a rally marking the anniversary of the movement's foundation, in Gaza City

Palestinian group Hamas has signalled readiness to resume talks for healing the inter-Palestinian rift with the Fatah-dominated Palestinian Authority (PA) government in the occupied West Bank.

“We reiterate our readiness to continue dialogue to restore unity and rebuild Palestinian national institutions based on partnership,” leading Hamas member Hossam Badran said in a statement.

Last month, the PA announced the resumption of security coordination with Israel after cutting off relations in May in response to Israel’s plans to annex parts of the occupied West Bank.

The move was criticised by other Palestinian factions, with Hamas saying the PA resuming talks with Israel had stalled the inter-Palestinian dialogue. 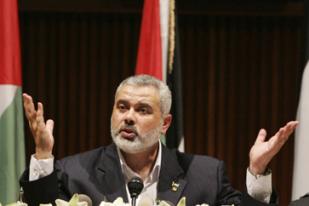 “The about-face carried by the Palestinian Authority in returning to relations, cooperation and speaking to the [Israeli] occupation […] constituted a strong impediment to achieving the breakthrough in reconciliation that we were hoping for,” he said on Sunday, in a televised speech aired by the Hamas-run Al-Aqsa TV on the 33rd anniversary of movement’s establishment.

Haniya, however, stressed that “Hamas is ready to build a Palestinian national unified scene to confront the obliteration projects to the Palestinian cause”.

Representatives from the two movements held talks in Cairo last month, to try to work towards Palestinian unity.

In September, the two groups also met in Turkey, where they agreed to hold legislative and presidential elections.

Fatah, however, said last month that disagreements remain with Hamas regarding the proposed dates for the polls.

The last Palestinian parliamentary elections were held in 2006 when Hamas won by an unexpected landslide.

Hamas and Fatah formed a unity government, but it soon collapsed. Fighting erupted in the Gaza Strip between the two factions the following year, after Hamas accused Fatah of staging a pre-emptive coup.

Hamas seized control of the Gaza Strip while Fatah ran the PA in Ramallah. Numerous attempts of reconciliation through the years have not yielded any positive changes.