As the country’s soldiers advance in the conflict with Armenia, every “liberated” territory is celebrated and tens of thousands of refugees plan their return to lost lands. 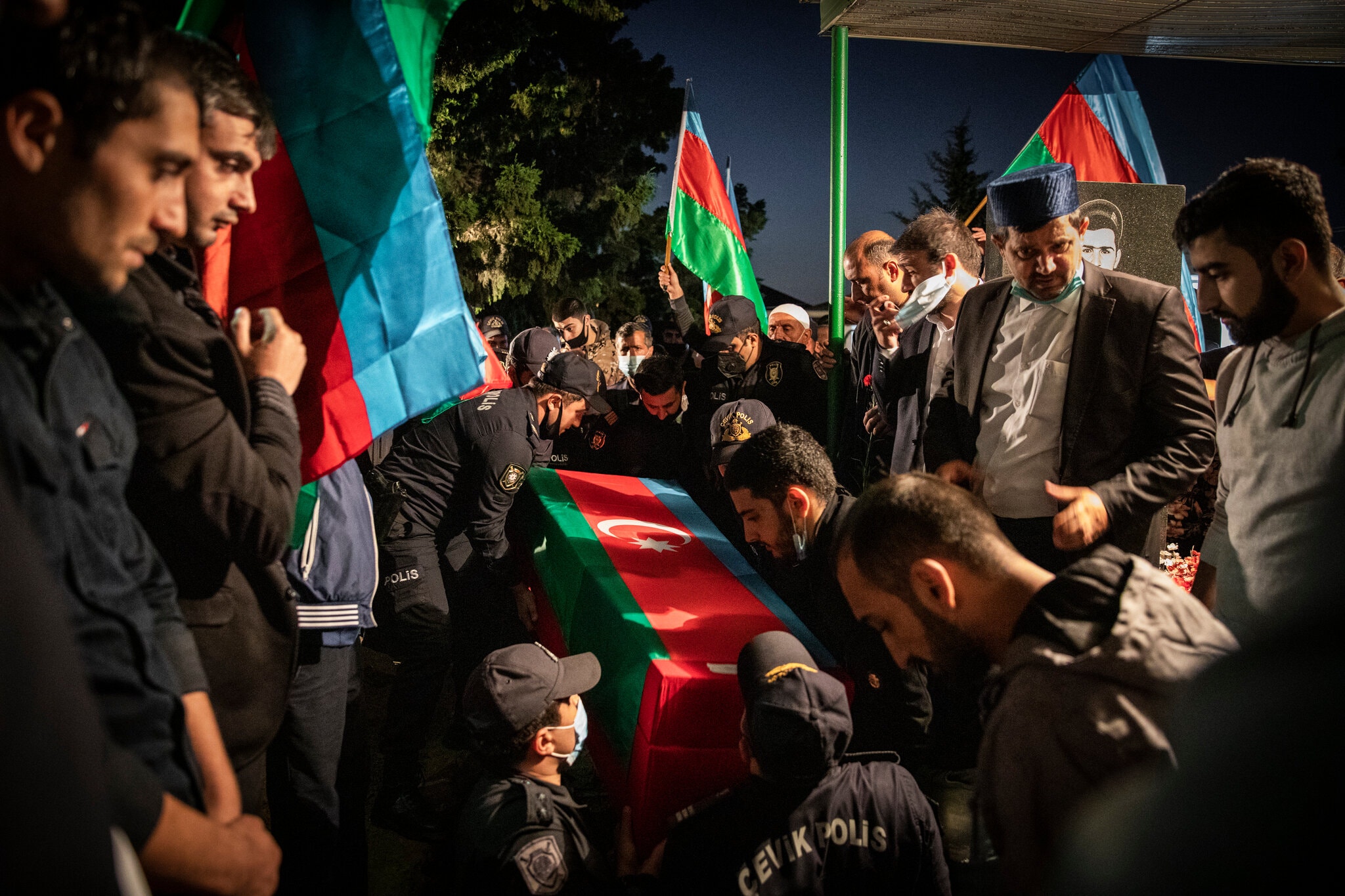 The funeral of Eldar Aliyev, 26, who died fighting in the war against Armenia, in Baku, Azerbaijan, on Sunday. “If the nation calls, he has to go,” his father, Suleyman Eldar Aliyev, said.

BAKU, Azerbaijan — As dusk fell, the sound of wailing carried on the soft evening breeze. Women filled the courtyard of a small house, keening over a coffin draped in the national flag. Men clustered in hushed groups in the narrow alley outside.

The working-class neighborhood of Ahmedli, in the Azerbaijani capital, Baku, was mourning its first martyred son  since war broke out anew between Azerbaijan and Armenia in the southern Caucasus three weeks ago. Eldar Aliyev, 26, a manager in one of Azerbaijan’s biggest finance companies and a volunteer soldier, had spent barely two weeks at the front before returning home in a coffin.

Azerbaijan has not released numbers of military casualties, but funerals are underway, bringing the war home to its people. As well as Mr. Aliyev, a colonel of the army was also buried in Baku on Sunday.

Why is fighting erupting again between Azerbaijan and Armenia?

“If the nation calls, he has to go,” said Mr. Aliyev’s father, Suleyman Eldar Aliyev, standing against a wall and leaning on a crutch. His face deeply lined, he had few words. “Long live the nation,” he said.

Azerbaijan is in full war mode as it engages in the heaviest fighting since the original conflict with Armenia in the early 1990s over the disputed territory of Nagorno-Karabakh, an ethnic Armenian district inside Azerbaijan. Azerbaijan suffered a bitter defeat then, losing about 13 percent of its territory, with as many as 26,000 dead and around 800,000 displaced. 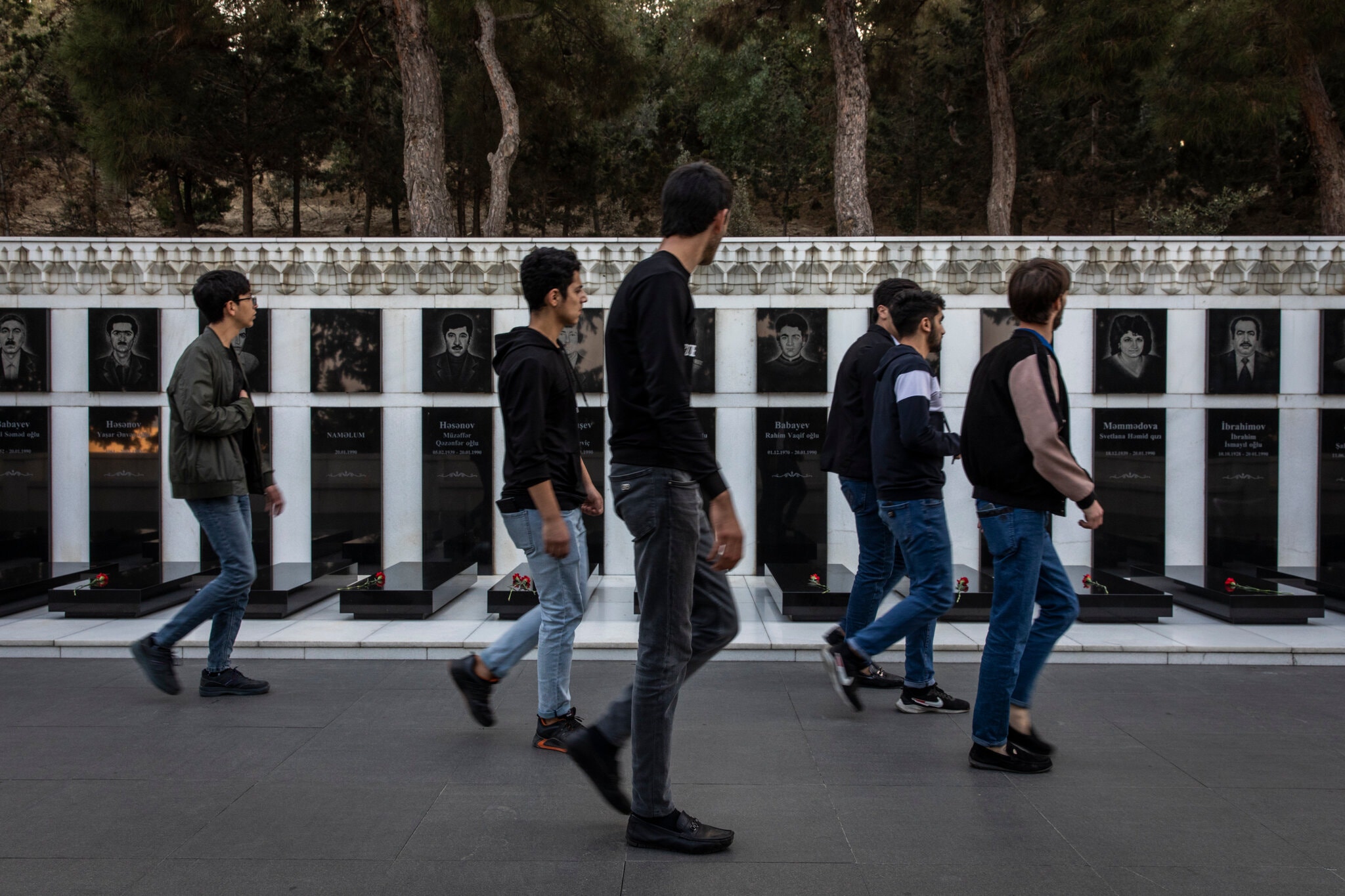 The Martyrs’ Alley cemetery and memorial in Baku is dedicated to the hundreds killed by the Soviet Army in a crackdown in 1990 and to the 26,000 soldiers and civilians who died in the original Nagorno-Karabakh War.

That’s where matters stood for 26 years of a frozen truce, interrupted periodically by spasms of violence that were quickly tamped down by outside powers. But Azerbaijan, an oil-and-gas-rich former Soviet republic, has been quietly rearming for years. When clashes broke out three weeks ago, the country plunged into an all-out war to reclaim the lands it lost.

Around the capital of Baku, signs of war fever are not hard to spot. The country’s bright three-colored flag hangs from every public building, while giant screens along the main streets downtown play horrifying video footage of precision drone strikes on Armenian soldiers. Every few days, President Ilham Aliyev, who has ruled the country since inheriting the office from his father in 2003, speaks to the nation and announces the names of villages and towns that have been newly “liberated.”

Anar Mamedov, 36, a cousin of the volunteer soldier who was buried in Baku on Sunday, said, “The Azerbaijani Army has shown its power.”

“This will continue until we liberate the last piece of our land, and at the end I would like to note that everyone will finally understand Azerbaijan,” added Mr. Mamedov, himself a war veteran who lost an arm.

“We were all waiting for this,” he said. “We were waiting for Ilham Aliyev to give the order.”

Azerbaijan is a tightly controlled society where dissent is quickly quashed. Criticism of the war, where it exists, is muted. Yet the general mood is overwhelmingly supportive. In numerous interviews, Azerbaijanis expressed their frustration that peace efforts led by France, Russia and the United States have never brought a resolution, despite repeated United Nations resolutions in Azerbaijan’s favor. 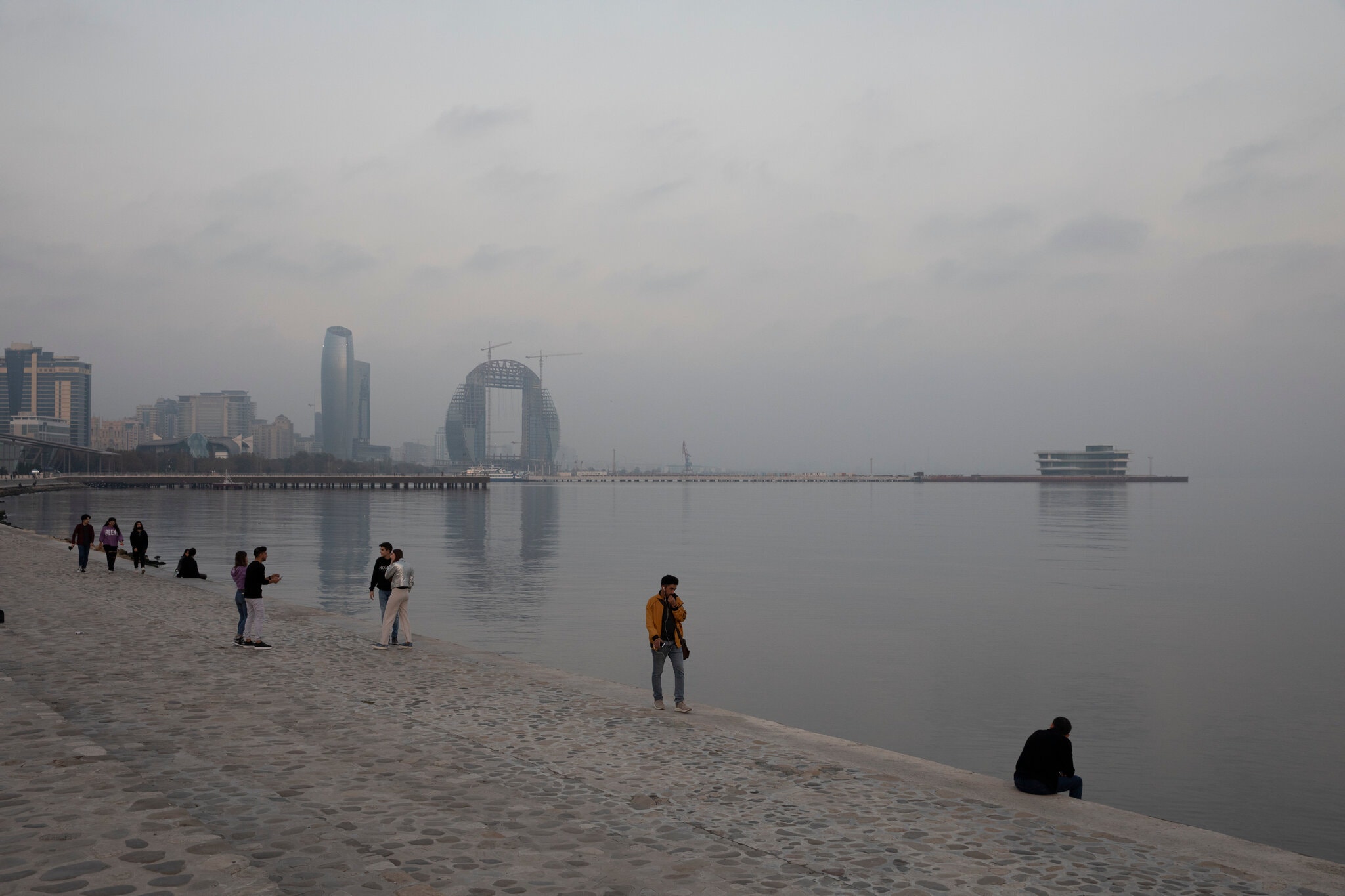 The shore of the Caspian Sea in Baku. Azerbaijan, an oil-and-gas-rich former Soviet republic, has been quietly rearming for years.

“This is not Aliyev’s war,” said Zaur Shiriyev, the South Caucasus analyst for the International Crisis Group, in reference to the president. “It is all of the people’s war.”

Mr. Shiriyev said that many Armenians, and Western officials working in the region, had never fully understood how important the losses of both life and territory were to Azerbaijanis.

An award-winning investigative journalist, Khadija Ismayilova, who was jailed by the Aliyev government for her work in 2015, said that she and other activists were keeping a moratorium on dissent while the war raged. “You keep it down because soldiers are dying there,” she said.

But she said she could feel popular anger building in recent months as the Armenian side adopted an increasingly aggressive stance. “I am usually cool about politics,” she said, “but I was angry.”

In a dilapidated, half-built school building in a northern suburb of Baku, more than 1,000 refugees still live in cramped, unsanitary conditions where they first found refuge from the war decades ago. Their rooms are divided by flimsy plywood walls and residents cook and hang washing along a narrow underground corridor. 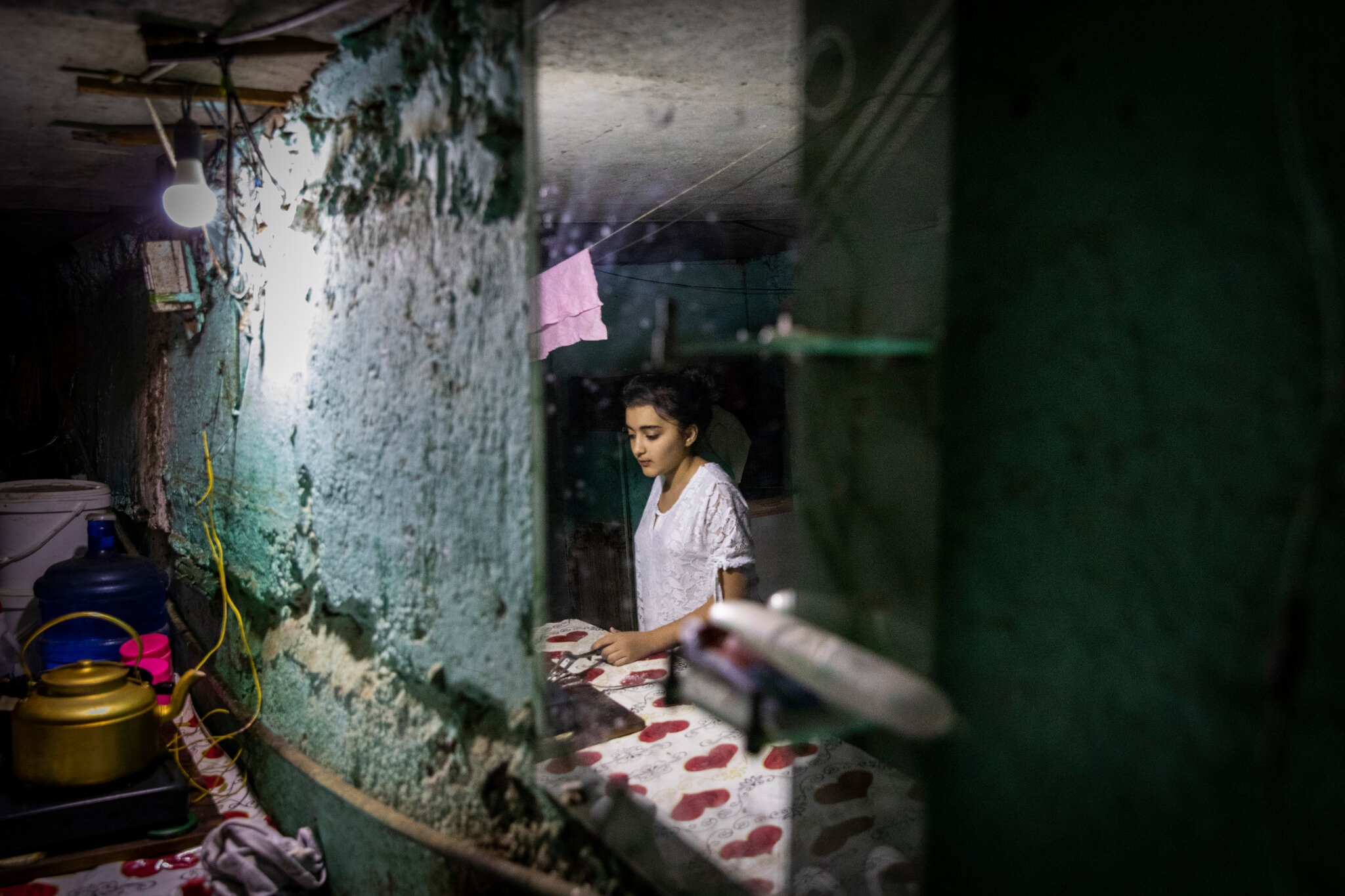 Yasemen Abasova, 12, cooking lunch for her family in the basement of an unfinished school in Baku where many refugee families have been living for decades.

“Everyone lost hope with the peace discussions,” said Ulriya Suleymanova, 34, who lives with an extended family of eight in a damp set of rooms that smelled of the sewers below. “Our president offered peace for years, but nothing changed.”

But now she has reason to celebrate. Both her family and that of her husband are refugees from Jabrail, a district near the Iranian border. She pulled out her cellphone and played a video of Azerbaijani soldiers celebrating a day earlier as they raised the national flag at a bridge near her village.

“From 1993, we were called refugees, but now our lands have been liberated, we are no longer refugees,” she said. “We have proof. We saw the bridge and the flags in Jabrail. Of course we are very happy when we see these things. I was 7 when we left.”

For Ms. Suleymanova, there is no doubt they will return home. In Baku, she works cleaning houses and her husband sells security cameras. But work has dried up with the coronavirus, and they are struggling, she said.

“My grandfather had lands, we had fruit and vegetable farms,” she noted wistfully. “It was not like now, this poor life.”

Many of the Azerbaijani refugees come from agricultural villages and towns in seven districts, including Jabrail, that surround Nagorno-Karabakh, which was populated mainly by ethnic Armenians and was always the focus of the dispute between the two countries.

The districts now lie largely abandoned except for military defenses. The withdrawal of occupying Armenian troops and the return of the Azerbaijani refugees have long been considered first steps in any negotiated settlement. 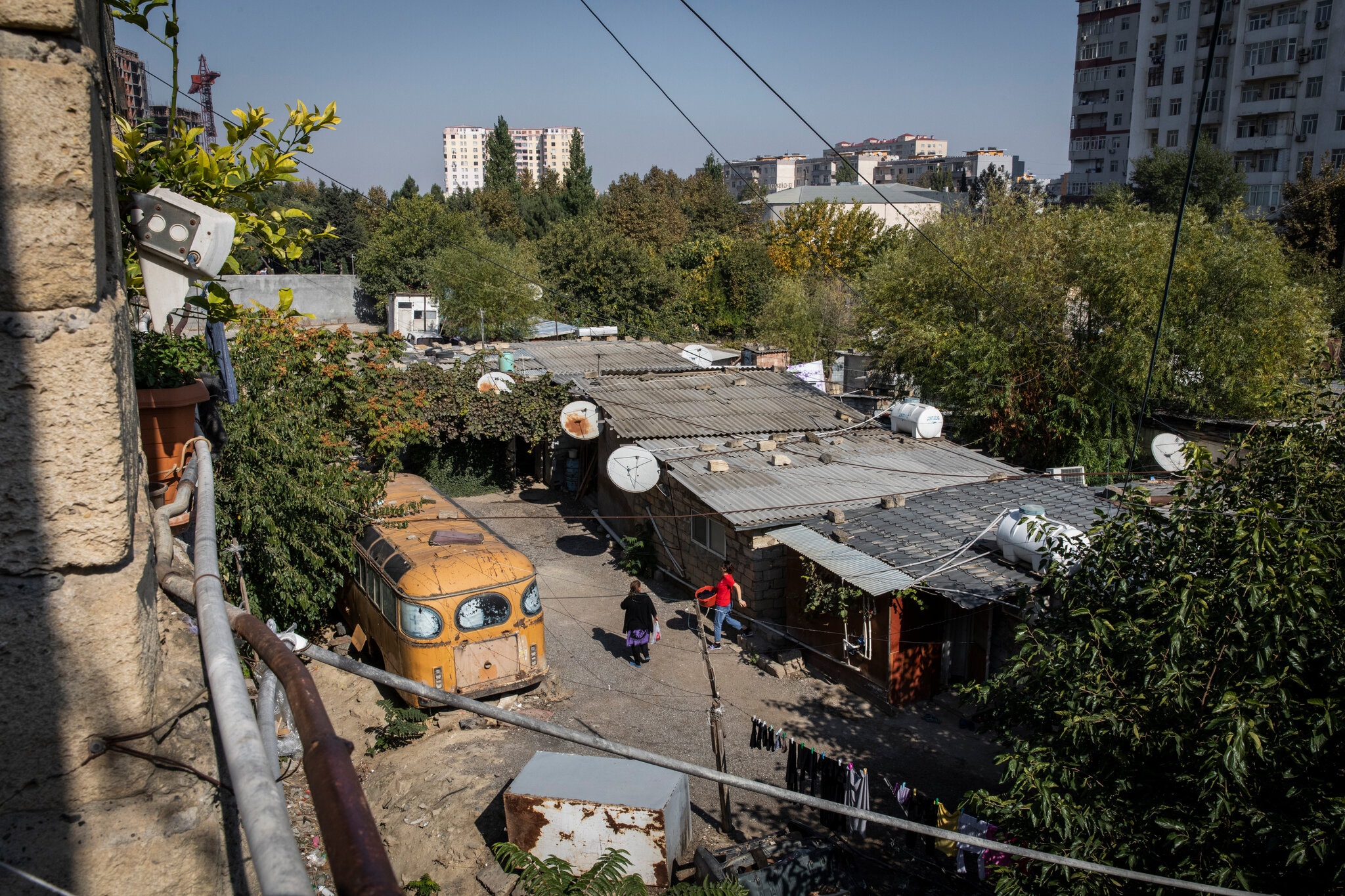 Refugees also live in cramped hovels above ground at the unfinished school complex.

The Azerbaijani Army has sought to push back the Armenian troops by force, focusing on three of the southernmost districts, Fizuli, Jabrail and Zengilan, that border Iran. On Tuesday, the president, Mr. Aliyev, announced that troops had secured Zengilan, the third district, though an Armenian government spokesman said that heavy fighting was continuing.

The declared capture of some of their home districts has fired the refugees with excitement but also brought painful emotions flooding back.

“We were crying and smiling at the same time,” said Ulker Allahverdiyev, 78, a refugee at the derelict school building who lost her husband and a son in the war. A widow with five children, she worked as a cleaner in a school, but lost two more daughters in the years as a refugee. “I was working day and night,” she said. “I was scared of my own shadow.”

A teenager lay asleep under covers on the sofa beside her. “Her uncle and her neighbor went to the war and we cannot reach them and we are worried about them, so we are taking care of her,” she said.

Her memories from the earlier conflict were crowding in. “It makes it harder,” she said. “Our children become martyrs and I am very worried. All of them are my children.”

But she said she supported the war. “Of course, I want to see peace. I don’t want people to die, but of course it is worth it.”

Along an underground passage, another refugee, eager to talk, opened the door to a cramped single room where his wife and two sons have lived for two decades. Ceyhun Seymur Khudiyev is from the city of Agdam, a ghost town today, that remains under Armenian control. But he was fired with confidence.

“I believe that we are going to get our lands back,” he said. “Justice is taking its place.” 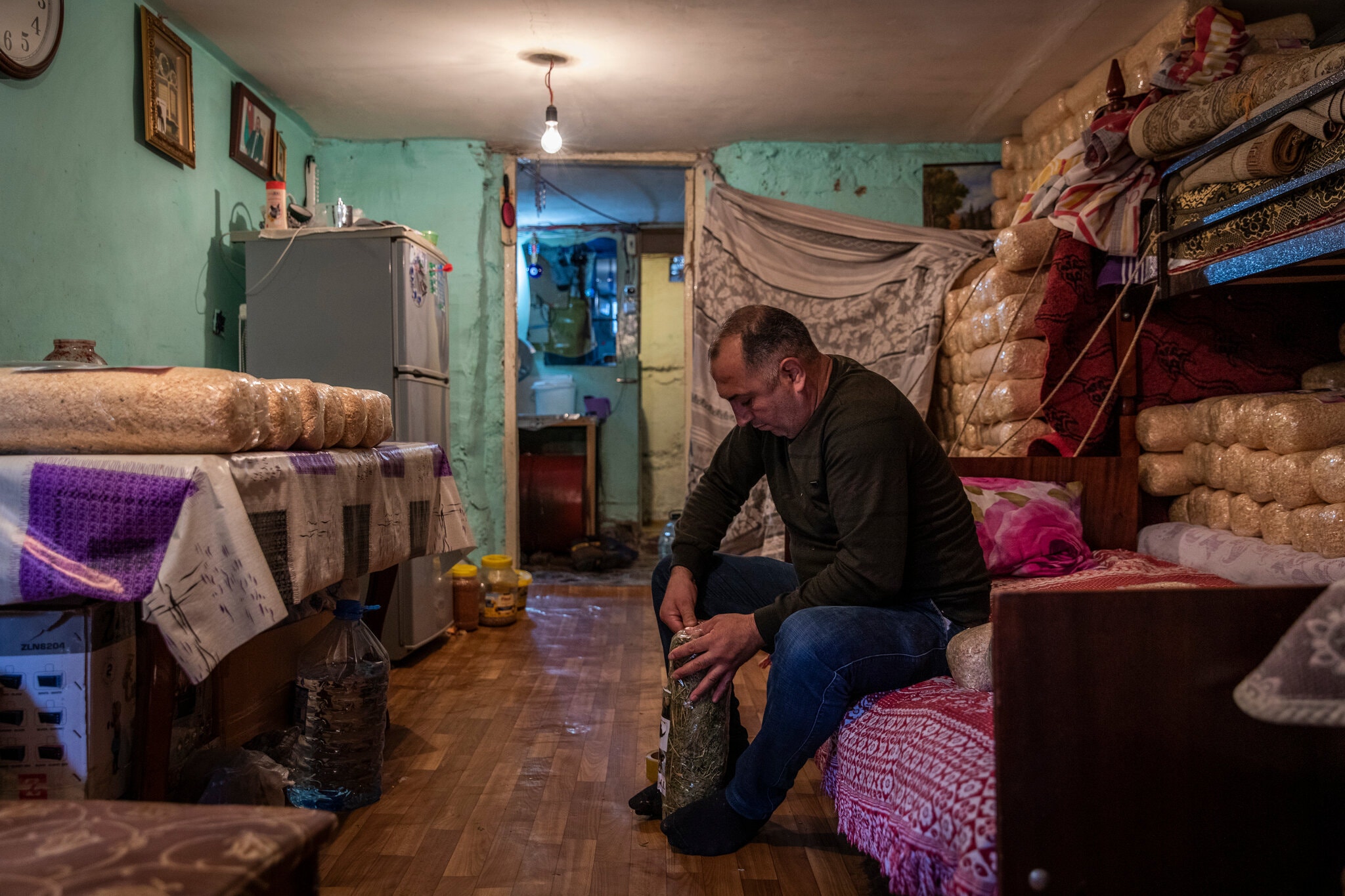 “I believe that we are going to get our lands back,” said Ceyhun Seymur Khudiyev, whose home village is a ghost town under Armenian control. “Justice is taking its place.”

Even refugees who have been able to build businesses and buy property have started plans to return to their homes, said Eldar Hamzali, 26, whose family comes from Fizuli.

He pulled up a page from Google maps to show his family house and land. Although the government has said it has secured much of Fizuli, the village where Mr. Hamzali’s family comes from is apparently not yet under Azerbaijani control. Nonetheless, he said his uncles had already decided where each would rebuild their homes. Mr. Hamzali has even been asked to calculate the costs of transporting the remains of relatives who died in exile for reburial in the village, he added.

“The feeling that you are temporarily here never left us,” he said of his life growing up in Baku. “I think I could find some peace of mind. Here I’m a guest, but there it’s my village. I think I would feel much more secure.” 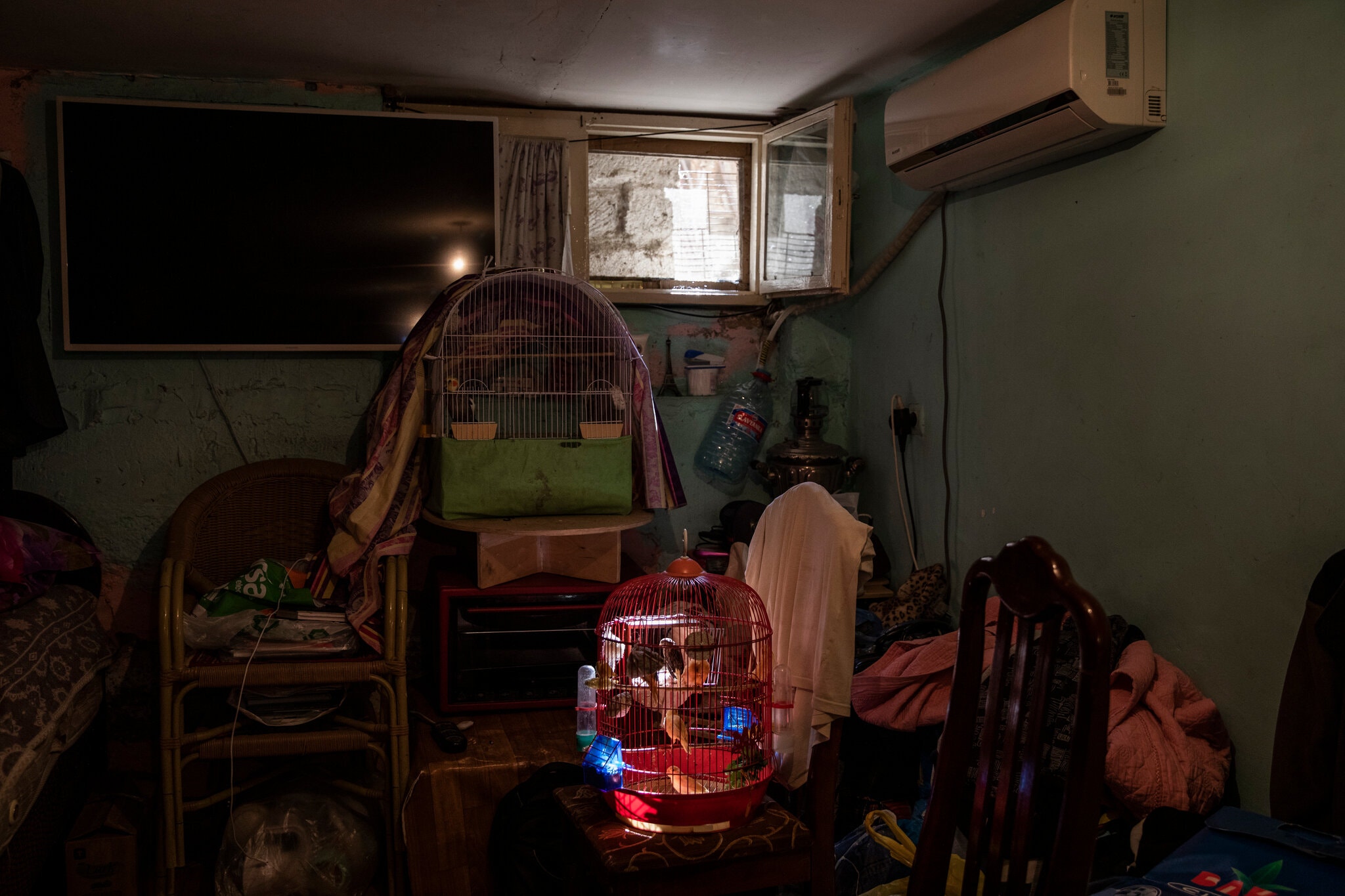 Mr. Khudiyev’s pet birds ease the gloom of the subterranean rooms where he and his family live.