While Azerbaijan is the main driver of the Nagorno-Karabakh war, analysts say, Armenia’s populist prime minister pushed the situation to the brink.

TERTER, Azerbaijan — For years, the leaders of Azerbaijan and Armenia had agreed to postpone discussion about the status of the disputed territory of Nagorno-Karabakh, to avoid inflaming passions. But that changed suddenly this spring, when Armenia’s populist prime minister declared the area indisputably Armenian.

To Azerbaijanis, who lost a bitter, unresolved war with Armenia over the region in the 1990s, the remark by the prime minister, Nikol Pashinyan, landed with explosive force. Even more infuriating, it was delivered in Shusha, a city that Azerbaijanis regard as their cultural capital but that lies in territory lost during the war.

“The final nail in the coffin of the negotiation process was when he said that Nagorno-Karabakh was Armenian,” said Hikmet Hajiyev, foreign policy adviser to the Azerbaijani president.

The two countries returned to all-out war a month ago, with Azerbaijan determined to retake the roughly 13 percent of its land that Armenia seized 26 years ago, displacing 800,000 Azerbaijanis in the process. The fighting threatens to draw in Turkey, on the Azerbaijani side, and Russia, which backs Armenia.

Casualties in the conflict have already mounted into the thousands, but as his troops make advances, Azerbaijan’s president, Ilham Aliyev, is showing no signs of slowing down, and the country is gripped with war fever.

AN OLD CONFLICT: Why is fighting erupt again in Armenia and Azjerbaijan?

A cease-fire mediated in Washington last weekend was broken within an hour of coming into force as both sides traded artillery fire Monday morning.

Mr. Aliyev is demanding that Armenian forces withdraw to internationally recognized borders in keeping with United Nations Security Council resolutions and basic principles agreed to in previous negotiations. These were the terms agreed upon 10 years ago but never implemented, and analysts say that Armenia became less ambiguous this year about claiming Nagorno-Karabakh and the surrounding districts seized during the war. 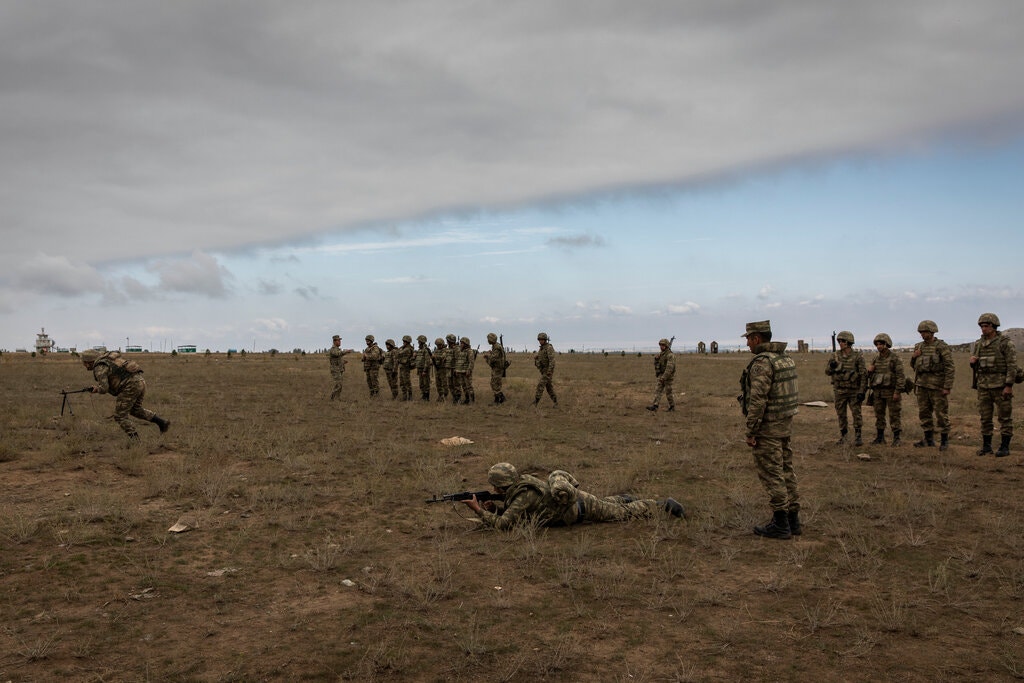 A training exercise for Azerbaijani soldiers near the front line. 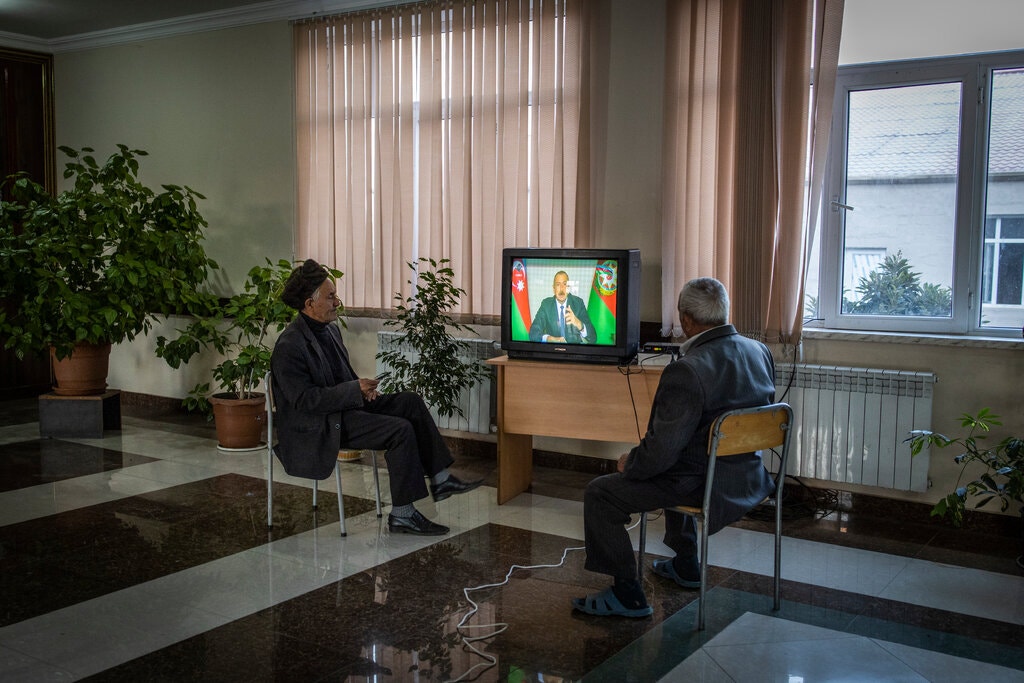 President Ilham Aliyev of Azerbaijan has made several speeches on national television in recent weeks, stoking popular support for the war.

Mr. Hajiyev said in an interview that Azerbaijan had hoped for progress when the Armenian leader, Mr. Pashinyan, came to power after a popular uprising in 2018. At their first meeting, Mr. Pashinyan, a former journalist, asked Mr. Aliyev for time but promised to pursue a new policy on Nagorno-Karabakh.

That policy never came. Tensions escalated this year, analysts say, as Mr. Pashinyan and his defense minister made increasingly populist statements over the territory, announcing plans to make Shusha the regional capital and in August moving the Parliament there. Those steps may ultimately prove to have been major miscalculations.

An American-Armenian historian, Jirair Libaridian, has suggested as much. “We became obsessed with our dreams instead of focusing on the possible,” he wrote in September.

Independent analysts largely see Azerbaijan as the main driver of the war, saying it prepared a major offensive, but add that Mr. Pashinyan pushed the envelope with his populist talk.

“It’s logical that Azerbaijan wanted to start this, not the Armenians, who merely want the status quo,” said Thomas de Waal, a senior fellow with Carnegie Europe and author of “Black Garden,” a book on Nagorno-Karabakh. “But the Armenians also played their part with provocative moves.”

The Armenian government has accused Azerbaijan of mounting a planned offensive and of instigating the clashes that led to all-out war, and says it is acting entirely in self-defense. 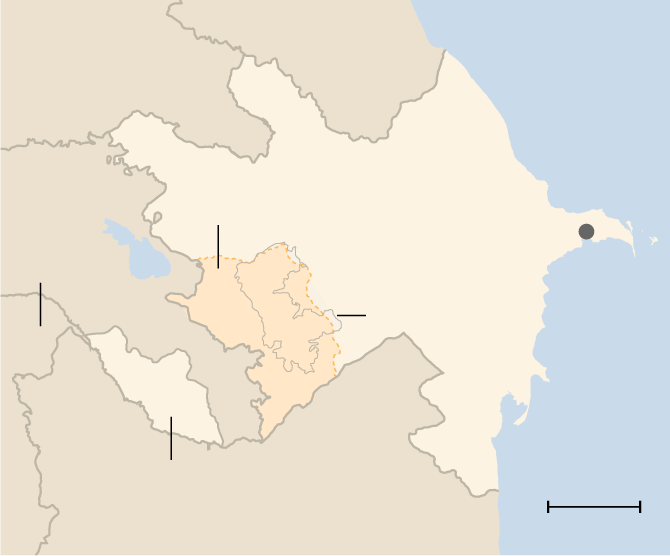 Russia has been a crucial presence backing Armenia. It supported Armenia in the original conflict, maintains two military bases in the country and has provided support and equipment.

Since the moribund truce in 2009, leaders of both countries proceeded carefully, believing it was politically safer to stick with the status quo than risk the territorial compromises that a peace deal would demand, Mr. de Waal said.

All the while, Mr. Aliyev, who inherited the presidency from his father in 2003, was using his country’s oil and gas wealth to build up the military, purchasing advanced weapons and sending officers for NATO-standard training in Turkey. 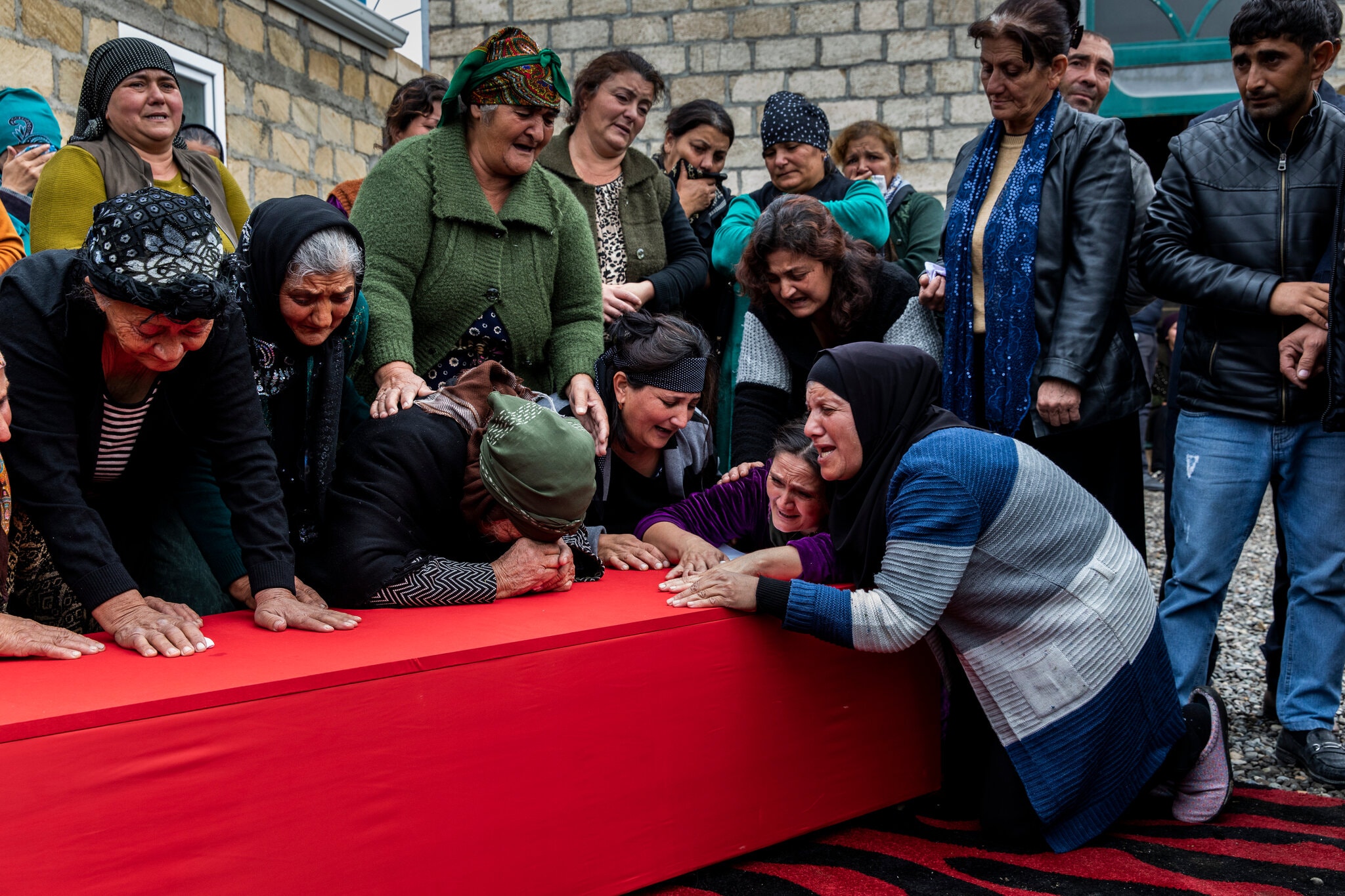 Mourning the death of Anar Isakli, a 23-year-old soldier in the Azerbaijani Army. The conflict has killed thousands of troops and more than 100 civilians. 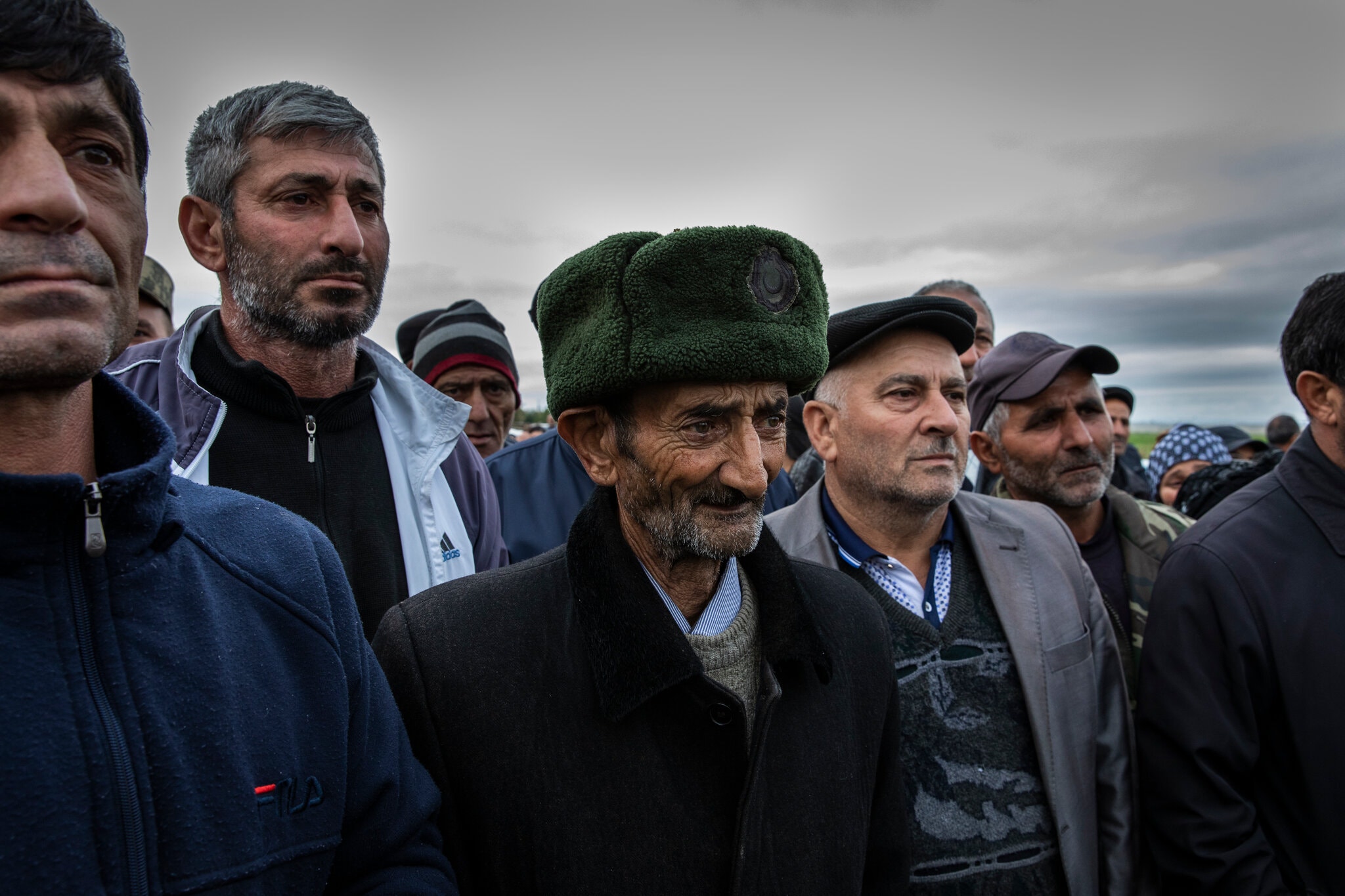 Friends and relatives watching as Mr. Isakli’s casket was carried toward his burial place near Terter, Azerbaijan. Few people attended  because they say Armenian forces have targeted other funerals.

The rearming effort seemed to bear fruit in 2016, when in four days of fighting Azerbaijani forces seized control of a village just over the cease-fire line. But Russia intervened to stop the advance, said Farid Shafiyev, a former diplomat and director of the government-funded Center for Analysis of International Relations in Baku.

The popular disappointment at that time was palpable, he said. He noticed the same public reaction when Russia negotiated a cease-fire on Oct. 10, just two weeks into the latest fighting. “People were very depressed,” he said.

The immediate spark for the current conflict came in July, in a deadly clash near the border town of Tovuz, where Azerbaijan’s vital oil and gas pipelines run on their way to Georgia and Turkey. 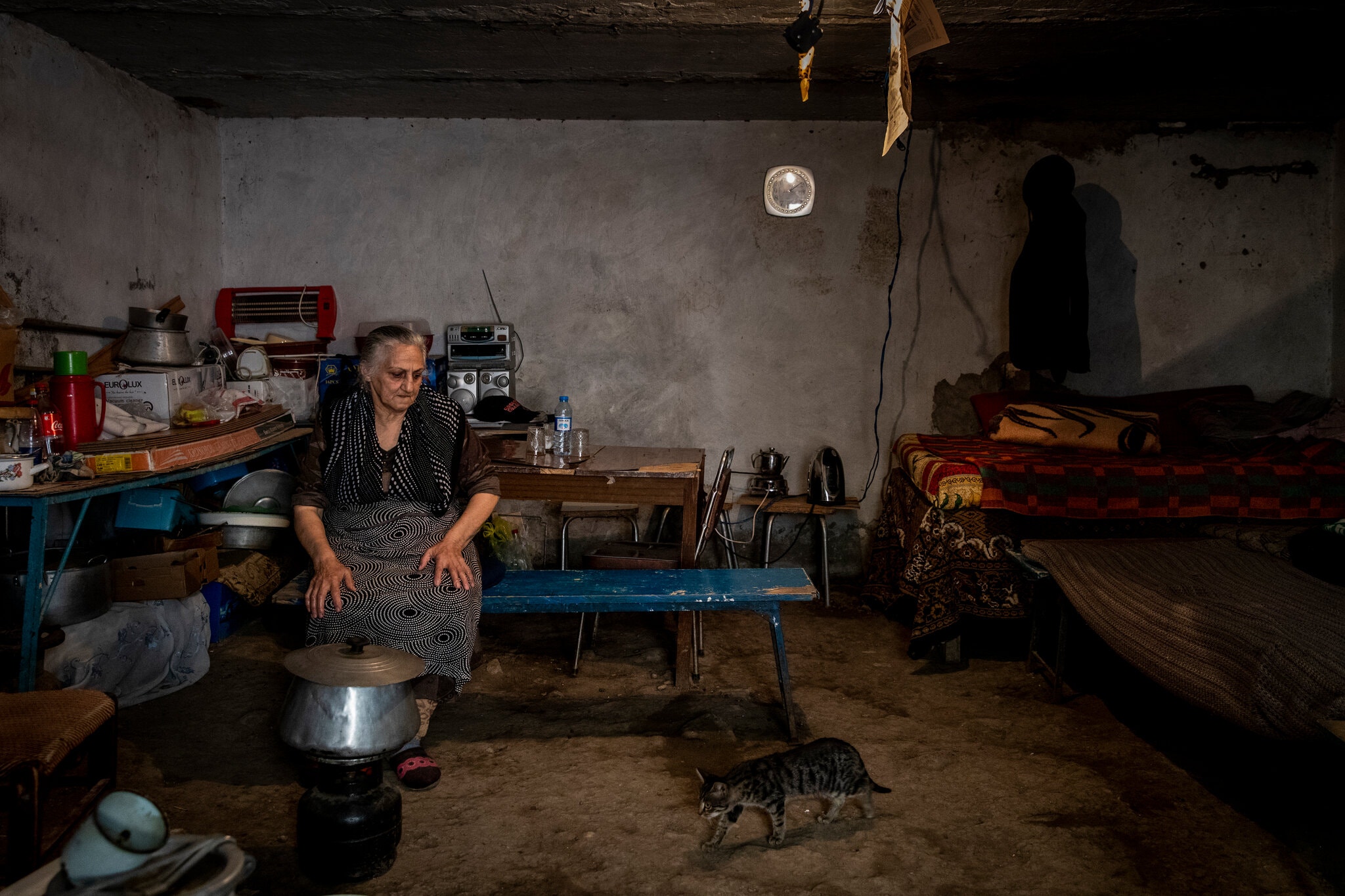 Seriyye Maharramova, 73, in the underground bunker that she shares with four other people in the city of Terter, where shelling has been ferocious. 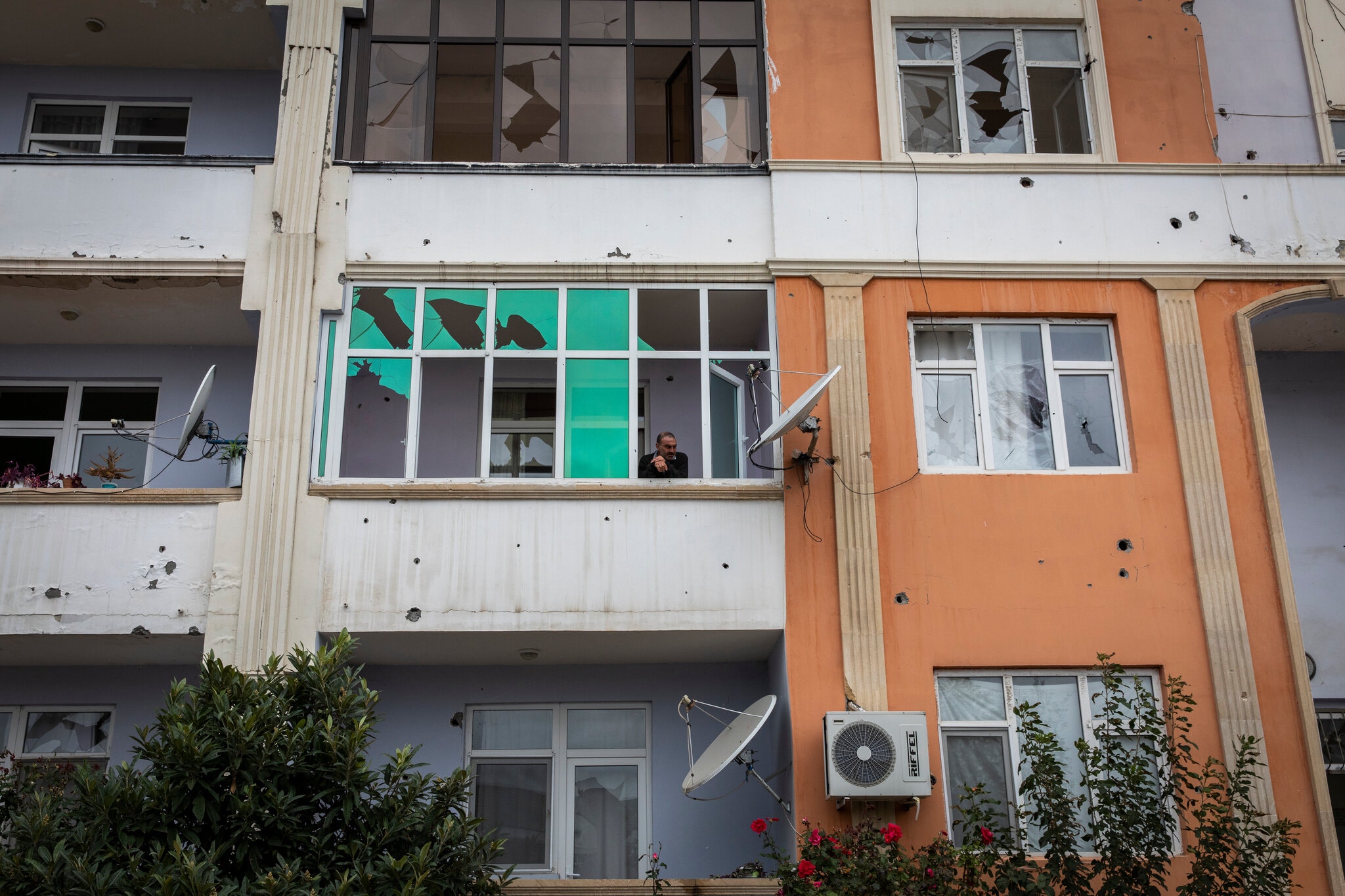 Terter, which is on the edge of a cease-fire line, has been battered repeatedly over the years.

Armenian soldiers fired on an Azerbaijani military vehicle, touching off heavy cross-border exchanges that killed more than a dozen people, including several officers.

One of those killed, Maj. Gen. Polad Hashimov, was a popular figure whose death stirred an outpouring of emotion. A small protest became a demonstration of tens of thousands of people marching through the capital, Baku, demanding that the country retake Nagorno-Karabakh.

“The July events sent a shock wave,” said Mr. Hajiyev, the policy adviser. “And public opinion and the youngsters sent this message: ‘Enough is enough.’”

Frustrations over the coronavirus pandemic and severe water shortages added pressure, said an Azerbaijani journalist, Khadija Izmayilova. “It was clear to Aliyev that the public was ready to explode and it was time to act.”

President Recep Tayyip Erdogan of Turkey regarded the clash at Tovuz as a strategic threat to Azerbaijan and immediately dispatched jets and troops for two weeks of joint military exercises with the Azerbaijani military.

Turkish analysts saw Mr. Erdogan’s move as a way to gain leverage in his dealings with Russia. But protecting his Turkic ally, which recently replaced Russia as Turkey’s main source of natural gas, was also hugely important.

“It is a cliché that Turkey was instigating it,” Mr. Shafiyev, of the Center for Analysis of International Relations, said of Azerbaijan’s venture into war. But he confirmed, as both Mr. Erdogan and Mr. Aliyev have since, that Turkey has promised active support if Azerbaijan were to run into difficulties.

In August, the Azerbaijani authorities said the army had detained Armenian troops making another cross-border foray. “We understood something was coming,” Mr. Hajiyev said. 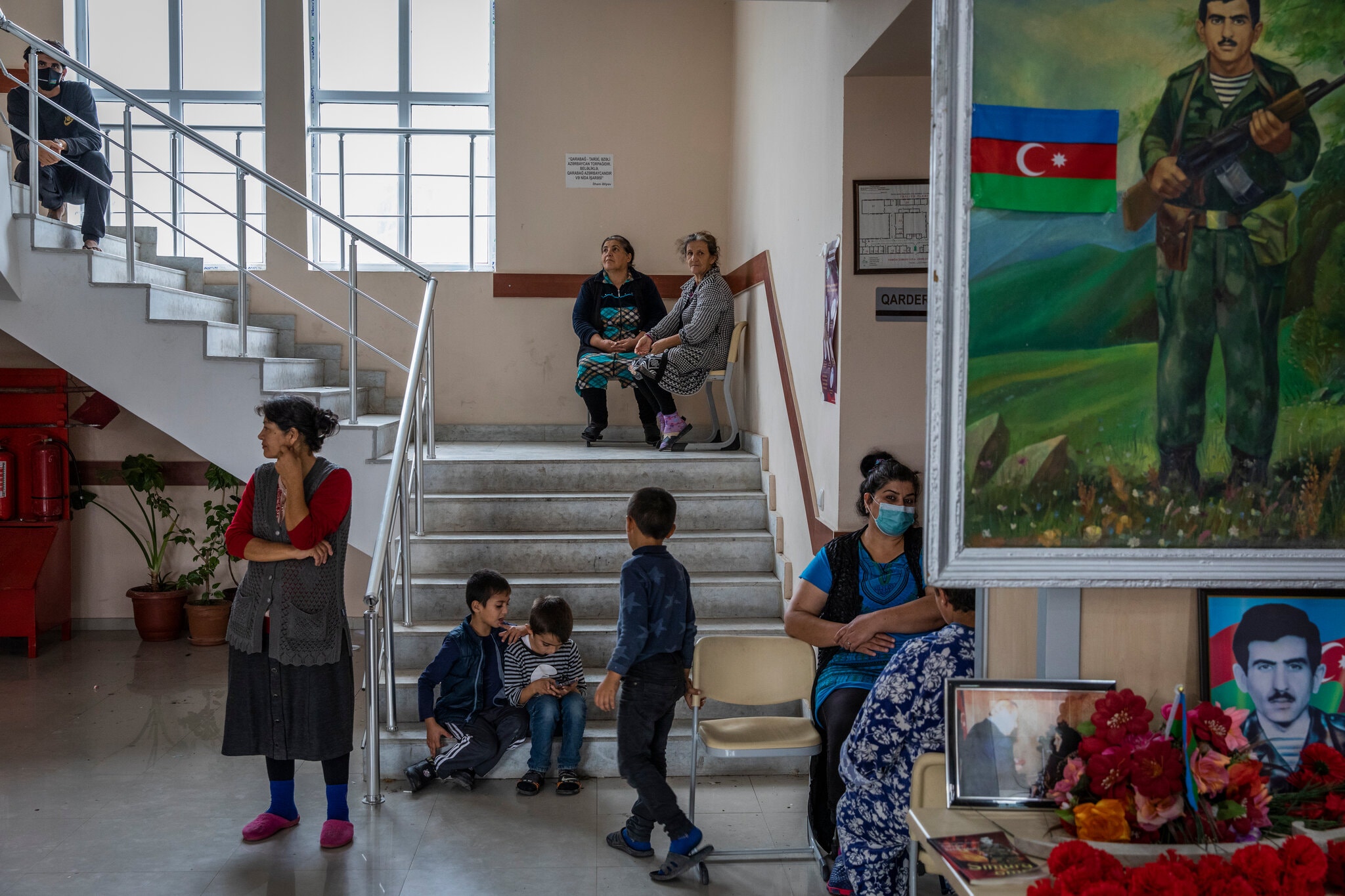 A school in Barda, Azerbiajan, has been turned into a shelter for people displaced by the fighting. 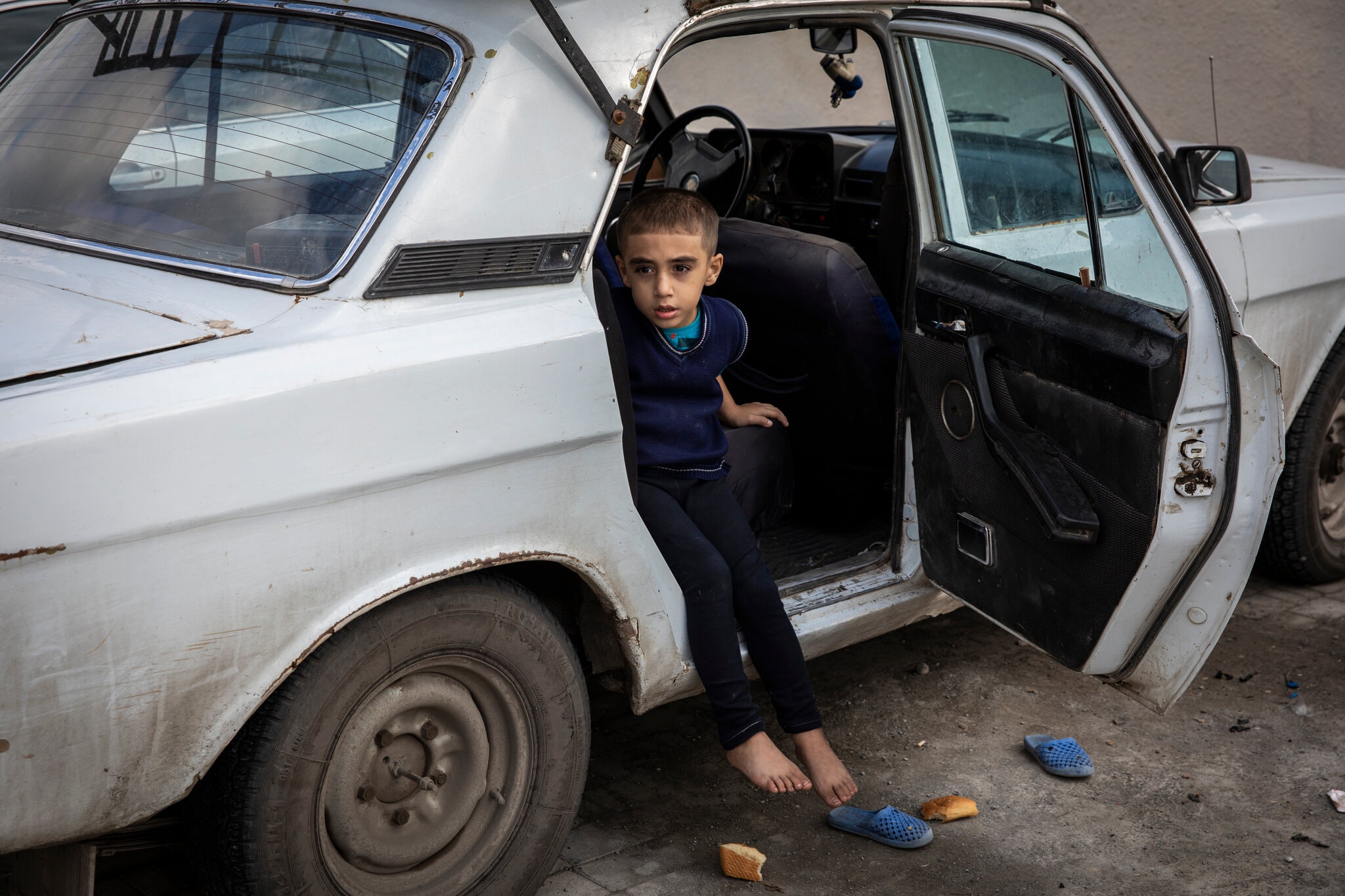 The school sheltered people from the front-line towns of Agdam and Terter.

After years of trading sporadic artillery fire, both sides were poised and ready for more by September.

Villagers living on the Azerbaijani side of the cease-fire line near the town of Terter were forewarned by the Azerbaijani military on Sept. 26. Some who had cars left in the night. Those who stayed described a barrage of Armenian rockets at 7 a.m. the following day.

“We hear shelling all the time, but this was completely different,” said Gulbeniz Badalova, 59, who lives in Terter, just 500 yards from the cease-fire line. “They started to fire continuously, and we all got scared.”

Azerbaijan quickly retaliated, saying it was defending its civilian populations. “They started attacking civilians and we were obliged to make a counter offensive operation,” Mr. Hajiyev said. But even some officials admitted they had been waiting for an excuse to launch an attack.

Azerbaijani troops have already retaken parts of four southern districts along the border with Iran and have come within striking distance of the Lachin corridor, a mountain pass that is a critical supply route from Armenia.

But there is little doubt that it has been tough going for Azerbaijani forces. Baku has not released numbers of military casualties, but President Vladimir V. Putin of Russia said on Thursday that each side had already lost more than 2,000 soldiers in less than a month of fighting. Missile strikes have also killed at least 65 civilians from Azerbaijan and 37 from Armenia, according to official figures from both sides.

Public support for the offensive remains solidly behind Mr. Aliyev and the army, but the president could face a difficult job managing expectations.

Many Azerbaijani families displaced by the shelling in Terter are originally refugees from Karabakh, and said they would not be satisfied if Mr. Aliyev halted after taking only a few districts.

“It’s not enough,” Zarifa Suleymanova, 43, said, before listing all the regions Azerbaijan needed back. “We have very brave sons. It will not take long.” 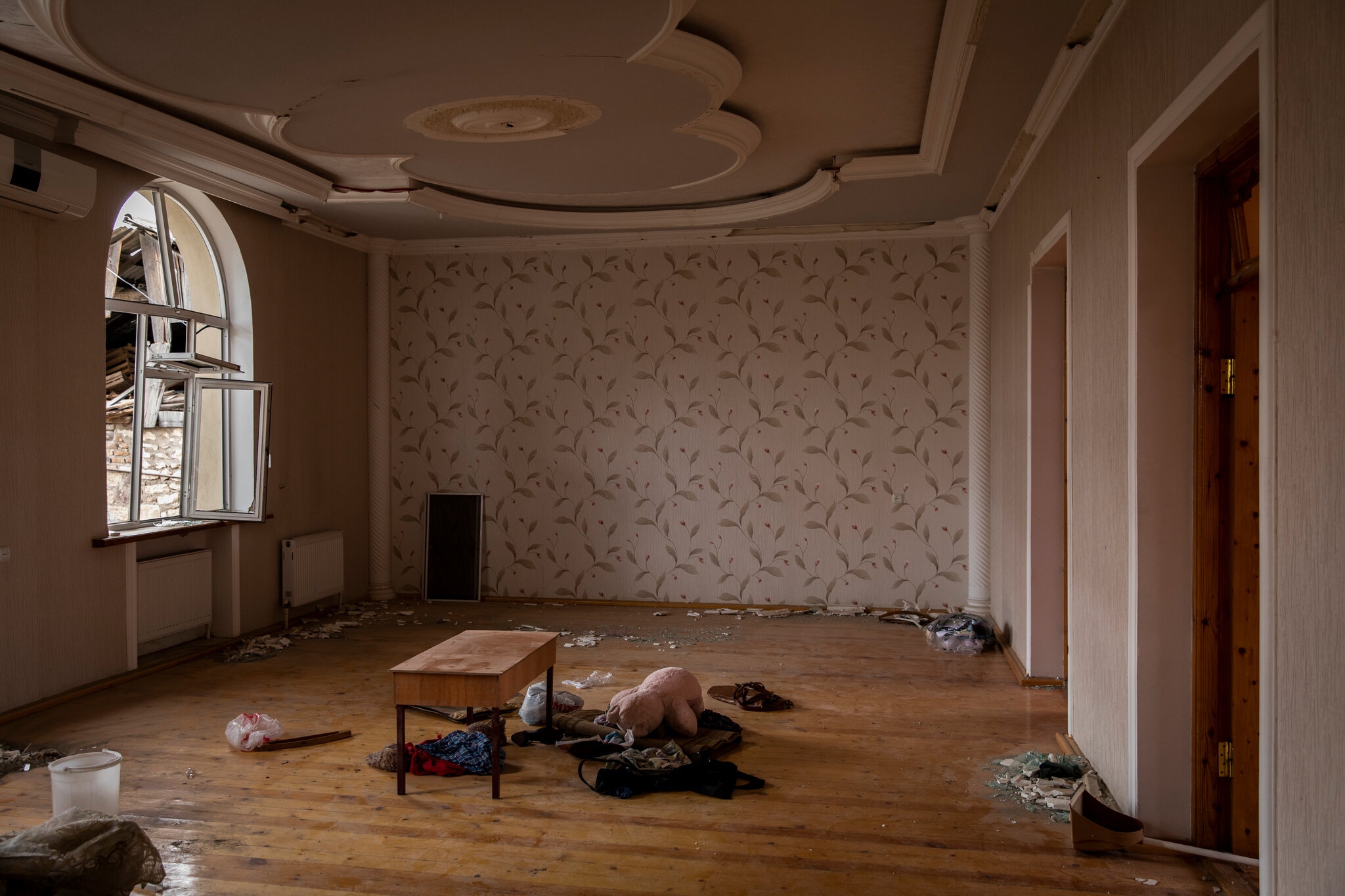 A home in Ganja, Azerbaijan’s second-largest city, that was damaged by a missile strike.